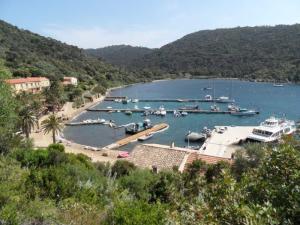 We recently published the story of a traveling couple who explored the Côte d’Azur by bus, using the apartment in Les Marines du Levant as their base.

But what if you came earlier in the season? If you did not have your own wheels, could you visit on your own feet?

This is just what the Ludbrooks, who visited in early May, did. Here is their story. Our heartfelt thanks to Hilary for taking the time to write and for sharing these beautiful pictures.

« We had very good weather in early May when we visited Les Salins.

We had hoped to use the buses more than was possible so early in the season but we had downloaded the timetables from the internet so it wasn’t a surprise to find so few running, though we were surprised to find so few going to la Tour-Fondue as the boats to the islands are so frequent. It was virtually impossible to make the connections so early in the season – hence we ended up walking rather more than expected–around a hundred kilometres in our week !

Walking from the Toulon-Hyères airport

It’s about 5 kilometres from the airport to the apartment and is easily walkable as long as you don’t have too much luggage. We had only hand luggage but it does get quite heavy by the time you arrive ! The cycle way is brilliant to wheel a small case along, but it moves away from the route you need as you get near to the apartment and then the track by the road is quite rough.

We bought  a ten-trip bus ticket for ten euros, not as much of a bargain as the couple who travelled later in the year [read their story here] but we thought it was a fantastic deal. We managed to get to la Tour-Fondue several times by bus; it was the return trips that were the problem.

It’s very nice to be able to have a half hour or so break in Hyères when changing buses as it enables you to do a little shopping – especially to jog the few hundred meres to the main, pedestrianised shopping street and buy an English paper ! 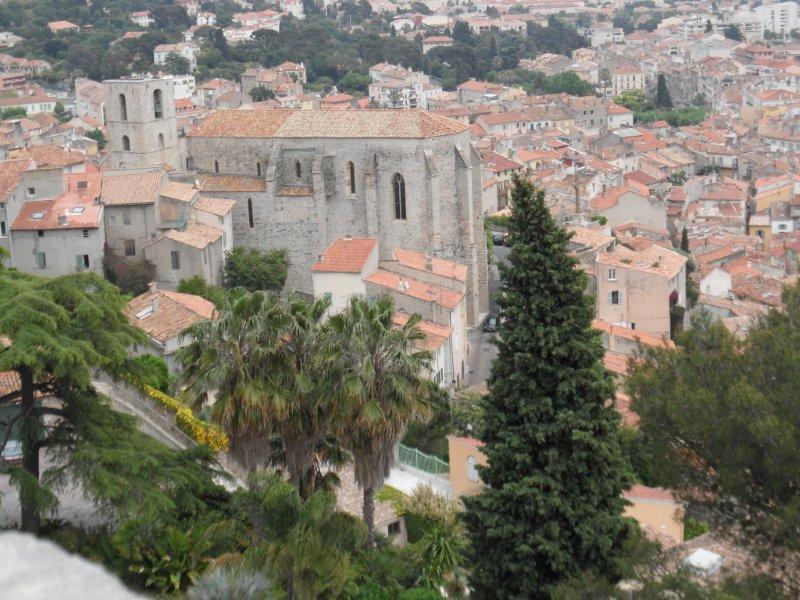 We caught the bus to Carqueiranne hoping to be able to walk the Sentier Littoral (coastal trail) to le Pradet but it’s not possible to walk along the coast after the first few kilometres. We got hopelessly lost and spoke to an old lady tending her garden near le Pradon, which is a pretty little seaside village. She tried to help us but our French isn’t very good; however, we managed to pick up a footpath for a while. The road wasn’t too busy and eventually we found part of the Sentier starting at Mine de Cap Garonne. This wasn’t open that day but would probably have been very interesting from reading the story boards about it.

The coastal walk from here to les Oursinières is absolutely stunning; the cliffs and flowers are so beautiful. Les Oursinières itself is a very pretty little fishing port [which name comes from « Oursins », sea urchins in French]. We sat on a bench in the sun and ate our picnic. 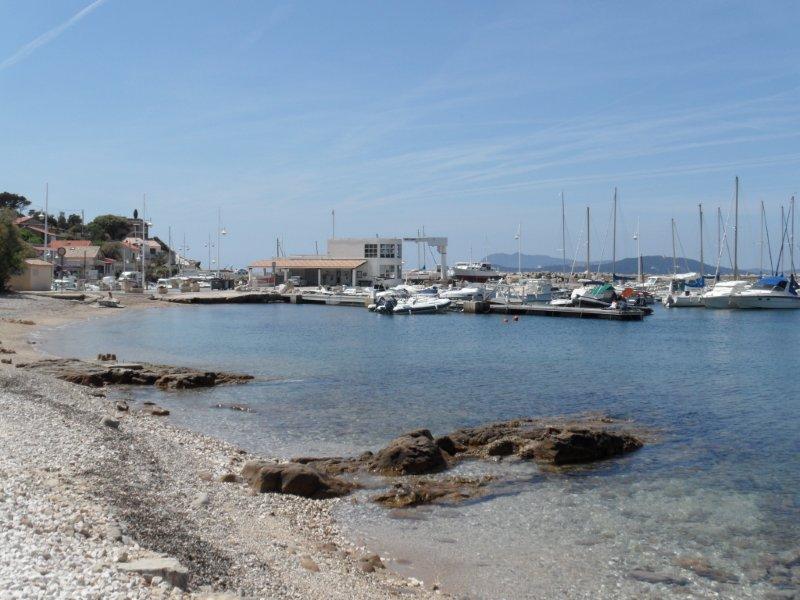 The charming harbour of Les Oursinières

We carried on to la Garonne and around the sea edge – tricky !- until we could walk up into le Pradet and catch the bus back. While we were waiting, a couple of local schoolboys came up to us and started practising their English ! We had time between buses in Hyères to find a good supermarket and do some stocking up.

We twice walked along the coast from the apartment towards Cap de Leoube. This was much prettier and more interesting than we expected from our map, which made it look like a straight walk. The coast is nicely indented with stretches of beach and tree-shaded paths. There are several beautifully clean toilets en route which was a very welcome surprise.

Port de Miramar in La Londe-les-Maures is a busy place with lots of restaurants. You can also catch the shuttle boat to Port Cros here. The further you walk the nicer and emptier the beaches are-though there is a car park – with more toilets ! – behind one of them. 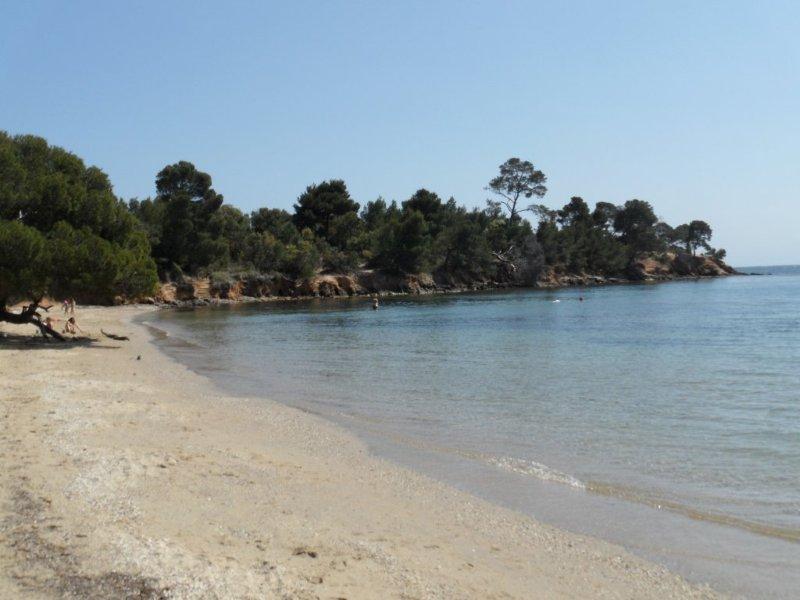 One of the days when we walked back it became quite windy and by the time we reached Les Salins there were lots of Kite Surfers on the water.

We visited Porquerolles and did a shortish walk there – around eight kilometres – but there were so many bicycles that it became a challenge not to get mown down by them.  Also, the beaches we saw were very long and busy.

We absolutely loved Port Cros -bicycles not allowed ! – the harbour is tiny and very pretty and the walks are brilliant. Buy the map for a couple of euros from the beach shop, though the routes are very clearly marked as well. We went twice and did the North side one day and the South another.

There are several very pretty beaches, though I expect they are very crowded in high season. We didn’t find the best one until we were on our way back to the boat on our second trip so you should head straight for the one to the West of the port. [Plage de la Palud].

The best beach we found on Port Cros island

The Val de la Solitude is fairly strenuous but well worth it. You can eventually get to the viewpoint for Ilot de la Gabinière and the views back down to various forts on your way down are brilliant. 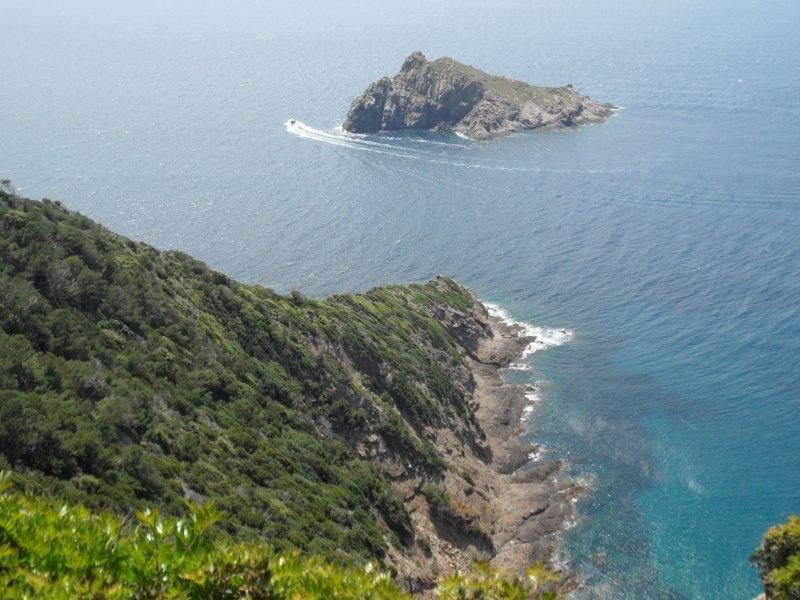 I think we did about twelve kilometres each visit but on our return from our second trip we completely mixed up the bus times and ended up walking from La Tour Fondue to the roundabout at Ayguade before we could catch another one; not a happy experience!

There weren’t many people about in the evenings is Les Salins so not many restaurants opened in the evening but we had a very good meal in the one just before the supermarket-as you walk from the apartment.

We also had a very funny evening in « Snack Chez Jo » with huge plates of Spaghetti Bolognaise; « Jo » doesn’t speak English (why should he ?) and refused to understand our attempts at French so he enlisted a young man from a crowd drinking outside who turned out to be very helpful and charming. Unfortunately the cafe was never open in the evenings again after our first night. The supermarket is very well stocked so we ate in the apartment several times. The gâteaux are fabulous.

Regards the apartment; don’t make our mistake and keep your bedroom blind shut so that you forget you have a balcony there ! It was several days before I thought of it, but then was rewarded with a beautiful sunset while we drank our complimentary rosé wine. Magic. »

Many thanks again for sharing your experience, we hope to welcome you again some day soon! 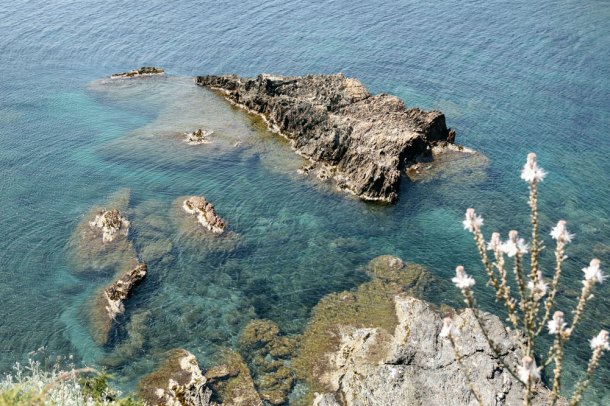 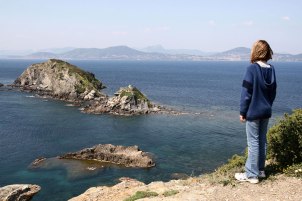 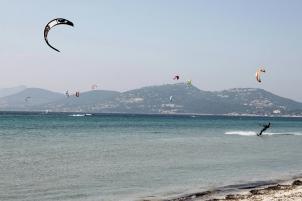 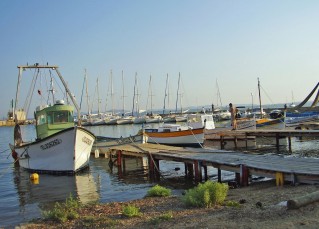 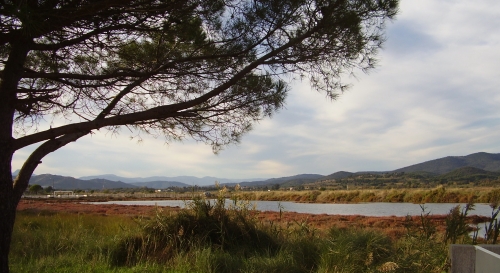